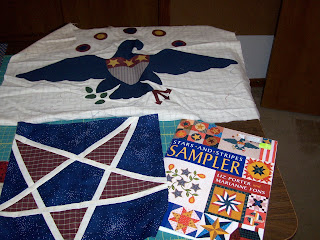 I am not much of a garage sale shopper but yesterday one of those little signs at the entrance to a nearby neighborhood said “quilters” with an arrow pointing into the neighborhood. I followed the signs and came to a home with the doors all open and a sign proclaiming the quilters sale. It was an estate sale. There were tubs of fabric through out the living room, patterns books and notions dominated the kitchen and dining room, a couple sewing machines and more tubs of fabric in the family room. Some may have thought of this as a quilter’s jackpot but I felt a little intrusive going through this women’s things and a little sad. Her family was there monitoring the sale and told a couple of us shoppers her name was Ann, they were so surprised by all the fabric and quilt related things they found that she had. We laughingly assured them it would be the same way at all of our homes. Ann had several tubs of quilts that were started. 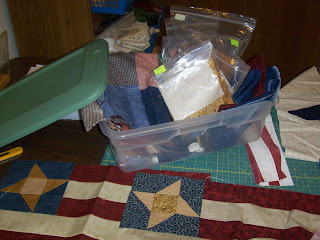 I bought this one with the Fons and Porter quilt called Stars and Stripes Sampler. This quilt was based on a public television series they did in 2001. I could tell so much about Ann by going thru the tub today. She was very organized, all of the blocks are already cut out and placed in little zip lock baggies with the page number in the pattern book on a piece of scrap paper. 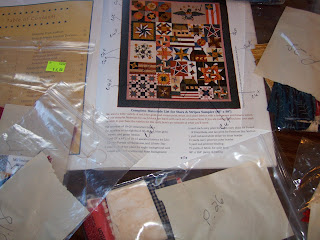 She marked in the book each block she had completeted, each block that was cut out, and a big X on the ones I guess she did not want to make.
At the bottom of the tub were spools of thread and prewound bobbins of thread in the all of the color of the quilt. 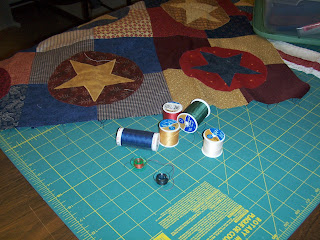 Ann must have liked applique, those blocks were all completed so she obviously did them first.

I have made my own version of this quilt before, twice. 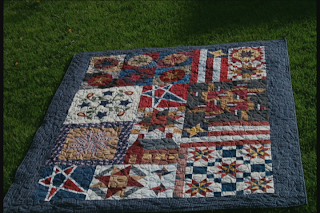 I made it for two of my friend’s whose sons joined the army after 9/11 and went to Iraq. This very patriotic quilt seemed so appropriate for these friends, while they were very proud of what their sons were doing they were so very worried about them and a quilt that you can wrap around yourself is my way of sending a hug. We are now 10 years after 9/11 and one of these friend’s son has made the army a career. He is now a married young man with two little boys under 5 years old. My friend told me a couple years ago that her daughter in law has always liked that quilt and admires it whenever she visits. My friend’s son left last month for a tour of duty in Afghanistan, and so dear Ann where ever you are, I am finishing your quilt. I know of a young mother who needs a hug. 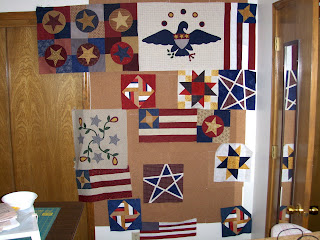 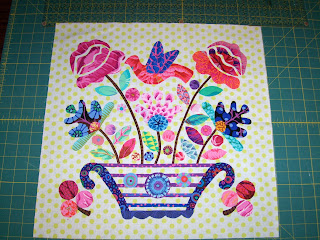 *if your pattern is not reversed you must put it face down on your light box and trace the applique fusible from the back. My favorite fusible web is Lite Steam A Seam 2 (there is a regular Steam a Seam 2 that is much heavier), it is double stick fusible web and very light weight, it is lighter weight than light Heat and Bond. 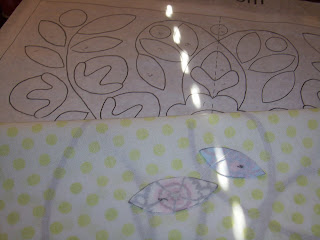 *I number the applique pieces on the back of the pattern and on the inside edge of the traced applique pieces, I frequently will even put a arrow point up so it is easier to place flowers and other round applique shapes. 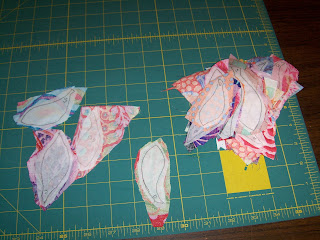 *I do not feel the need to window - leaving just ¼ inch of fusible on the inside edge of the applique shape - when I use the Lite Steam A Seam 2 (SAS2 from here on in this post)- it is that light weight that it does not really add bulk to the applique pieces. I do however window so I can use the inside of some large pieces for other applique shapes-SAS2 is expensive and it helps to use those spaces. 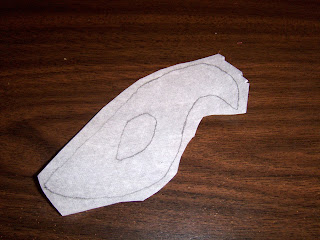 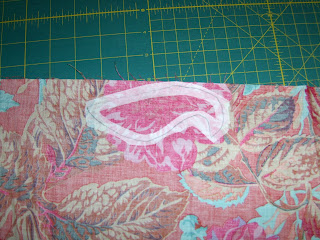 *Bias stems are so quick and easy! I iron a square of the fusible on the back of the fabric on a 45 degree angle and than just rotary cut scant ¼ inch strips as I need them for stems. 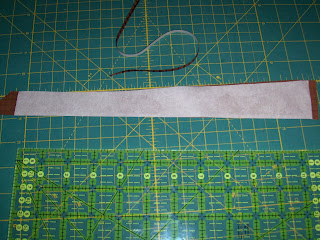 They bend and curve with the fusible on the back of the fabric just as a sewn bias stem will. 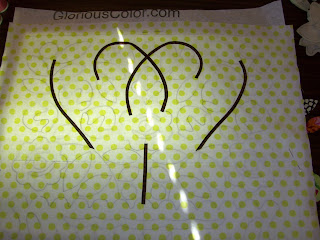 *Multiple layer applique shapes I build (iron the shapes together) on an applique pressing sheet and then move to the background fabric. 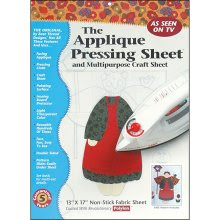 Did you know that you can make an applique pressing sheet by removing the fusible web material from the paper on either SAS2 or Heat and Bond? You can iron your applique shapes onto that paper and it will peel off just like a more expensive pressing sheet.

*I pin my background fabric to the pattern and place it back on the light box to start adding the applique pieces to the block. 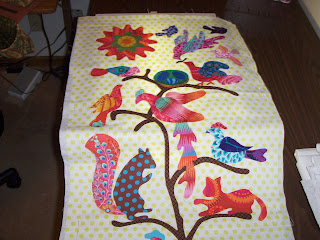 I lay out all of the pieces that have been cut out in numerical order and start building the block. 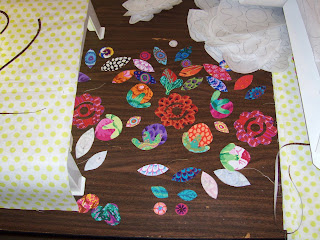 *Because SAS2 is double stick fusible it allow the pieces to be moved around but has the applique pieces stay where placed until the final pressing with a hot iron. This allows me to hang up a block and look at it from a distance and make sure I like all of the fabrics I have chosen for the block. I like to pin blocks to a quilt that hangs in my great room and see the block in the normal light of my home. 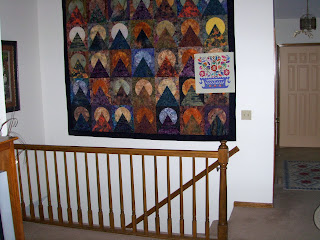 * I frequently spray starch my assembled block before I start blanket stitching, it gives it a little body and cuts down on little eyelash fraying (which can be trimmed with a fine scissors or even a fingernail clipper). 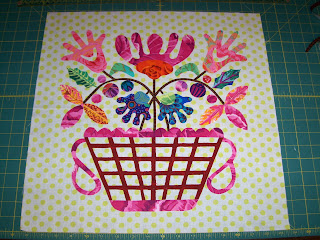 I have several Roseville Album blocks prepped and ready to blanket stitch. I like having the blocks ready for when I can find a few minutes here and there to sit and sew. 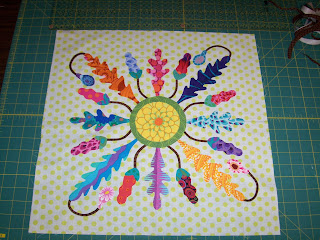 I like hand applique and machine blanket stitch applique equally as well and I really can’t say why I choose to do one quilt by hand and another by machine but I generally have one of each going. 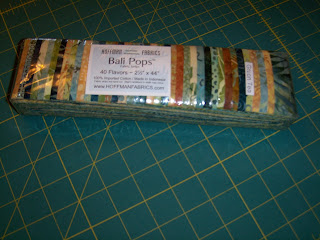 Camp Wannamakeablankie quilt retreat is next month and a member of my small group heard of jelly roll races and thought it would be a fun evening group project. Check out this You Tube video from Heirloom Creations of Souix Falls, South Dakota. www.heirloomcreations.net

I have finished the Stars over Bethlehem quilt, just have to sew down the binding. 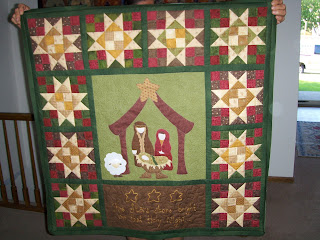 I am working hard on prepping the whole Roseville Album quilt. I am up to the two side borders and have the long trees traced and ready to cut. 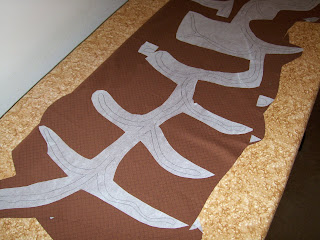 I am machine appliqueing RA and have been plodding along one block at a time and decided I want to get all of the blocks assembled and then I can maybe do better snatching out a few minutes here or there to do some blanket stitching. There is an alternative motive also, I want to get into the Kaffe stash and start using it for other projects (but did not want to use a fabric needed for RA) Like maybe some 2 1/2 inch strips for a jelly roll race : )


Happy Stitching All
Posted by Cheri at 1:42 PM 2 comments: 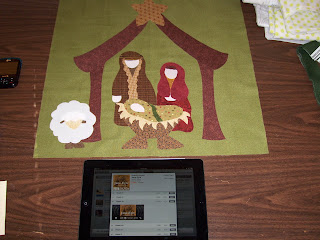 My love of Itunes University continues, I have found a section called Lit 2 Go from the University of Southern Florida where many of the classics in literature are in audio files. 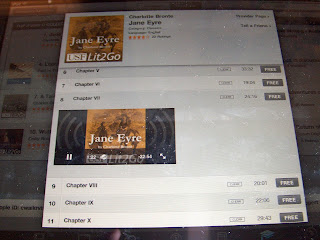 I love to listen to the audio books while I sew. I have the web site on my ipad (a recent splurge for my birthday) but you can get to Itunes on your computer also. I am working on a Christmas wall hanging quilt called Stars Over Bethlehem a pattern from Stitches and Sew Forth. 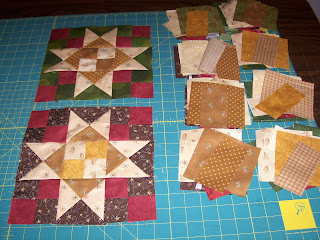 A little piecing, a little applique, a little embroidery, this quilt has it all. 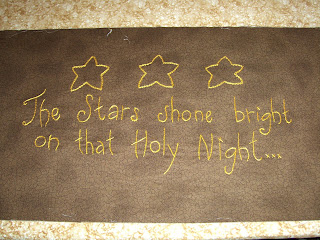 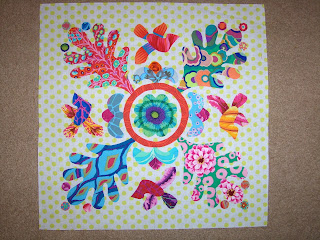 Roseville Album. I have had so many quilts I am working on for others I have not done an album block in a looooong time. This block is just prepped for machine applique, but it is a little progess none the less.

Have a good weekend all,

Cheri
Hello and welcome, glad you stopped by. Most of my quilting time is spent on appliqué quilts, both by hand and machine. I also like to do some English paper piecing and cross stitching.